Guide to the Solar System-1 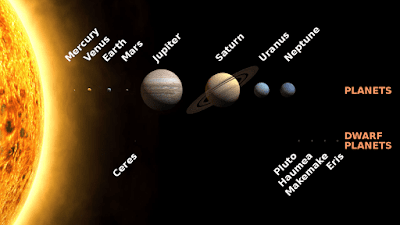 The solar system, our neighborhood, mostly empty, held together by the gravitational force of the Sun.  We are on the journey to find amazing mysteries out there. So let’s go.

Smallest planet in the solar system and closest to Sun, here comes Mercury weighing 3.3×1023kg only 1.4 times larger than our moon.
Venturing this close to Sun has its drawbacks. Mercury is tidally locked with Sun. Its surface appears cratered and similar to the moon in appearance. It has no atmosphere.
Being this close to Sun, mercury hasn’t lost his cool yet. Having temperature at night is as low as -170˚C and at the day as high as 430˚C. It shows a very dynamic temperature range.
But it is not the hottest planet of the Solar system. Being second hottest after Venus, it has similar topography as the moon.
It rotates on its axis exactly three times for every two revolutions it makes around the Sun. One day on Mercury takes 175.97 Earth days while it takes just 88 Earth days to orbit around the Sun.
Sun would appear three times larger than it does on Earth.
Only two space crafts have visited Mercury Mariner 10 in 1974-75 and MESSENGER in 2004.
BepiColombo is joint-mission by European Space Agency and Japanese Space Agency scheduled to launch in October 2018, will reach Mercury in 2025.
So just imagine you suddenly appear on the surface of mercury, how long you will survive there? Well, you will be either burned or frozen to death depending on where you land. Okay, let’s hope you don’t die this quick. So you will witness calmness of mercury as there is not weather activity going on. Gravity on the surface of mercury is 38% of that on Earth so you can jump 3 times higher than on earth.
If you survived the mercury lets go to our next stop…..

The second planet after Mercury, Venus also called sister planet of the earth because of similar structure and size. It is named after the Roman goddess of love and beauty. Beautiful indeed but it may not be loved by all.
Its surface literal hell with the temperature of about 4650C, making it hottest planet of solar system. The atmosphere of Venus is very dense having 96.5% CO­2, 3.5% nitrogen and sulfur dioxide. Pressure due to these gases at the surface is 92 bar i.e. 92 times that on earth.
These generate strongest greenhouse effect in the Solar system, trapping heat from Sun.
One day on Venus lasts 243 Earth days because it spins backward, with Sun rising in the west and set in the east. While it takes 225 Earth days to complete one orbit around Sun.
Current theory holds that Venus initially spun in the same direction as most other planets and, in a way, still does: it simply flipped its axis 180 degrees at some point. In other words, it spins in the same direction it always has, just upside down, so that looking at it from other planets makes the spin seem backward. Scientists have argued that the sun’s gravitational pull on the planet’s very dense atmosphere could have caused strong atmospheric tides. Such tides, combined with friction between Venus’s mantle and core, could have caused the flip in the first place.
Venus was the first planet to which probe was sent. In 1962, Mariner 2 flew within 34,400 km of the surface. Soviet probe Venera 7 was the first probe to land on Venus. From then 40 probes have been sent to Venus.
Let’s send you to the surface of Venus, the sky will appear red to you. You will not be able to see Sun as a distinct sphere but it will appear as a hazy tint. Winds blow at 400kmph in the upper atmosphere. You will be unable to breathe and will be under tremendous pressure about 90 times that on earth. You will be crushed by about 80 tonnes and your death will be painful. But if by the grace of technology you survived you may witness scenery like this.

Earth our home, third planet from Sun. Our home, on which you all are right now (Unless you are living in ISS). Earth is orbiting at 150 million km from Sun. A day here on earth is of 24 hours. And it has a moon. Its atmosphere is mostly made of Nitrogen, oxygen, and other ingredients. It is the safe harbor of life.
First satellite to orbit Earth was Sputnik 1 on October 4, 1957, by the Soviet Union. It was about the size of a beach ball weighing 83.6 kg. In the last 6 decades, we have launched around 3,500 satellites of which 1,100 are active.
On its journey to interstellar space, Voyager-1 turned its camera around and took one last photograph of Earth across a great expanse of space, at the request of astronomer Carl Sagan.

And Carl Sagan described it in the best way,

“Look again at that dot. That’s here. That’s home. That’s us. On it everyone you love, everyone you know, everyone you ever heard of, every human being who ever was, lived out their lives. The aggregate of our joy and suffering, thousands of confident religions, ideologies, and economic doctrines, every hunter and forager, every hero and coward, every creator and destroyer of civilization, every king and peasant, every young couple in love, every mother and father, hopeful child, inventor and explorer, every teacher of morals, every corrupt politician, every “superstar,” every “supreme leader,” every saint and sinner in the history of our species lived there-on a mote of dust suspended in a sunbeam.”

This is the first post in this series and more posts are coming in soon.
*(main image changed to eliminate confusion between next post.)
Categories: Solar System

Lying back on a dark night looking at the sky, seeing millions of stars sometimes we get an existential crisis. We are on a tiny planet in the solar system, orbiting Sun, which is a Read more…

Uranus and Neptune | Ice giants of the Solar system Far beyond the orbit of Saturn lie ice giants. Planets in the coldest regions of the Solar System.  Let’s explore these “ice giants”. Uranus and Read more…