How to get to Mars?

If you are a good friend of Elon Musk or a highly trained astronaut, your chance of hitching a ride to Mars will be high.
SpaceX is planning to send the first cargo mission to Mars in 2022. The first mission is planned to be unmanned.

Well, don’t worry manned mission is targeted for 2024. And the first mission on which you are not allowed will take equipment to confirm water resources and identify hazards.
It will also put in place initial power, mining, and life support infrastructure.
Don’t think you will have sufficient leg space in second mission also, it is supposed to take cargo to make propellant depot and preparing for future crew flights.
Well, problems you have to face on your interplanetary journey will be pretty tough to be dealt with.
For an interplanetary journey, you will be leaving Earth. And Earth even if you take it for granted, does a remarkable job in protecting you.

The Space outside the protection of the earth’s magnetic field is pretty harsh. The cosmic rays and radiation from Sun can do enough damage to produce cancer in your healthy cell.
And believe me, you don’t want that. Even if our saviors come with some shield to protect crews from radiation, you will not be fasting on your whole way; you will have to carry with you some food.
As the luggage goes on increasing harder it will be to defy the gravity of earth. Thus you will need a bigger rocket.

Your ride to Mars:

Here comes the beast of rockets, one and only BFR (Big Falcon Rocket) aka Starship from the hangars of SpaceX weighing 9,700,000 pounds (4400 metric ton).

This is proposed super-heavy rocket by SpaceX for carrying equipment and crew to Mars.
It has payload capacity of 220,000+pounds (100,000 kg). It has a unique concept to refuel the spacecraft in LEO (Low Earth Orbit).
It is our best hope to carry humans to Mars.

Okay so we arranged a ride for you, and you got onboard. But now you have months of the journey ahead.

Traveling to mars usually takes from 128 to 333 days.  This long time in isolation can take a great toll on psychological health. Less they interact with more people and live in confined space, more is the chances of them being lunatic.
Farther you go from home, chances of being homesick increase. You will witness the earth getting smaller and smaller in front of you.

To know how much this affects the human mind, this is what Italian space traveler Luca Parmitano said

“We haven’t yet developed the words to truly convey the realities of spaceflight. The building blocks of modern human communication, words are necessarily constrained by meaning and connotation. We just don’t think in terms of spaceflight.”

We don’t have words to describe what will be the experience of astronauts going to Mars. They will witness a huge planet of ours taking lesser and lesser space in their windows to finally looking like a tiny pale blue dot.
Apollo astronaut Michael Collins said

“I really believe that if the political leaders of the world could see their planet from a distance of, let’s say 100,000 miles, their outlook would be fundamentally changed.”

But you are a brave soldier and carrier of humanity, let’s hope that you overcame these challenges with your determination and willpower. And now you arrived at mars. But don’t relax yet, the most complicated part of your journey has just started.

How to land on Mars?

Landing on Mars has its own challenges. This red planet has an atmosphere 100 times less dense than Earth’s atmosphere.

The atmosphere on a planet is utilized to slow down the speeding spacecraft. The orbital speed is very high and it has to be reduced to a few feet per second for a soft landing. That’s how crew modules land on earth on their return journey from space.

But due to lack of thick atmosphere landing on Mars is pretty difficult.  The landing of the rovers on Mars was one the difficult phase of their missions. They had to use retro-thrusters, sky cranes, etc. to slow down these crafts.

But these rovers are nothing in comparison to the payloads we are talking about. Heavier payloads require more friction to slow down.
SpaceX has got a plan on how to land its huge starship. They have planned to land BFR or Starship like a skydiver. Starship is thought to glide toward the surface in free-fall controlling its orientation much like Earthly skydiver.
Check this video for further explanation.

So you have landed successfully on Mars, congratulation for that. But what it takes to be a martian.
According to Wiktionary Martian means inhabitant of planet Mars. It means someone who lives on Mars.
To live there you need a house, food, water, air, etc. Let’s see how you will get there.

How to live on Mars?

First of all, you need shelter to protect you from the Sun. Poor mars have lost its planetary magnetic field, so no protection from charged particles from the Sun and cosmic rays. Also due to thin atmosphere UV rays will be pretty harmful. 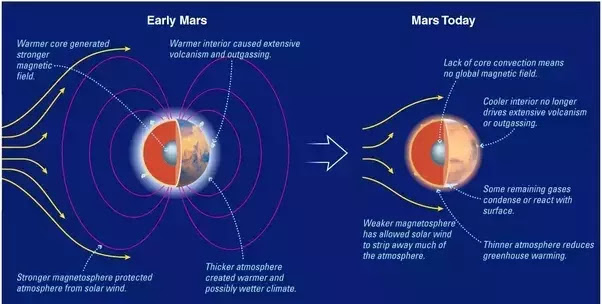 You can’t always live inside a spacesuit. So you need to build some sort of shelter there. Or maybe your predecessors may already have done that for you.
And there are few great options to consider how to build a house on Mars.
Check this video showing how it will work.

Okay, so we got your house. Now you need air to breathe. And we have got MOXIE to take care of that.
Introducing Mars Oxygen In situ resource utilization Experiment or MOXIE. It will convert atmospheric CO2 to O2 by a process called solid oxide electrolysis.

The scale model of MOXIE is going aboard on Mars 2020 rover. If it is successful, we got our supply of oxygen.
Now you can breathe but you must be thirsty after doing the hard work. Where is water?

Well, water is in the soil. Yes, you read it right, water is present in the soil of Mars. We have found that equatorial parts of Mars regolith have a water content of about 5% by weight. Even at poles water and carbon dioxide ice remain frozen, so it can also be utilized.

Okay, so you have water to drink what else you need. It is the moment to announce you…… wait a minute. Where is my cheeseburger? Oh, I forgot, you will need food.

So how to get food on Mars? I’m sure we will not send you without food. But you will eat it on way. And we can’t afford heavy luggage, remember thin atmosphere no landing. Thus you have to grow food on Mars.

Yes!! All hail lord Mark Watney, farmer of potatoes from poop. But will it work? Maybe. Martian soil lacks something called nutrients and biological materials because it has no life. So what Mark does, get his hands on first thing containing biological material ‘astronaut poop’.

But he forgets one thing that Martian soil contains deadly perchlorates. These can make your crops toxic. So no poop potato? No, don’t worry just wash it before you eat. Another issue is that poop contains harmful bacteria and pathogens. I’m sure you don’t want to get sick that far from home.

But hey, who needs soil at all. Use hydroponics. Hydroponics is a method in which plants are grown without soil by instead using a water mixture of nutrients and minerals.
So you can get rid of poop potato.
You got a house, air, food I think it’s time.
Finally, the moment has arrived *drumrolls*. You are now declared Martian.

Write down in Comments what do you think.
And Suggestions are always welcomed.

I want to book a ride

Will let you know as soon as we launch our transport to mars service. 😉

Let’s start with an experiment. Suppose there is an astronaut in space looking at a spaceship traveling at half the speed of light and the spaceship turns on the headlights. Now how fast would the Read more…

This is one of my earliest posts from Instagram. Let’s dive in and discuss it in detail. View this post on Instagram A post shared by Cosmic Ocean (@_cosmic_ocean_1) on Jan 2, 2019 at 7:47am Read more…